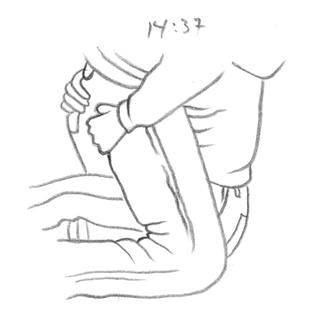 At the core of this exhibition is a series of 22 drawings made by Satorre parting from the observations he wrote down one day in October 2019 at Bosque de Chapultepec, a place of frequent romantic encounters located in Mexico City.

The drawings document in detail the different positions taken by the couple being observed (an individual wearing a black jacket, and the other a gray sweatshirt). On this occasion, they also served as models for the creation of molds dug directly in the ground of the CRAC’s garden, in which concrete was then poured. Fragments of bodies, such as legs and arms, were subsequently extracted to become part of the exhibition. In the words of the artist, this proposal “consists in connecting physically and conceptually the interior of the building to its garden”.
-
Opening from 12pm to 6pm.
The exhibition will remain on view until September 26th, 2021.