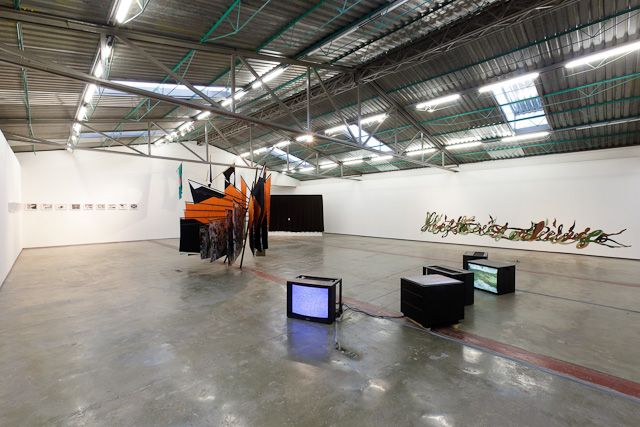 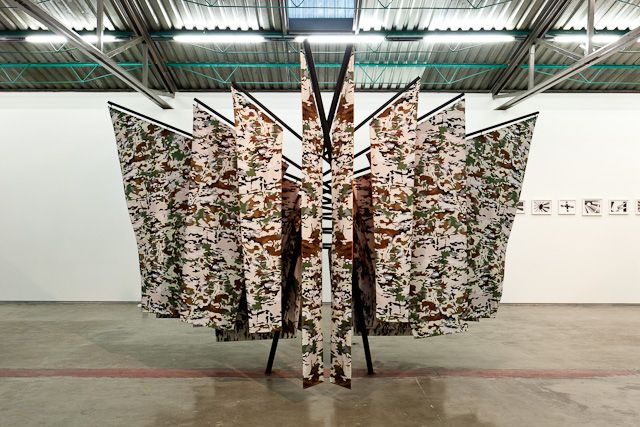 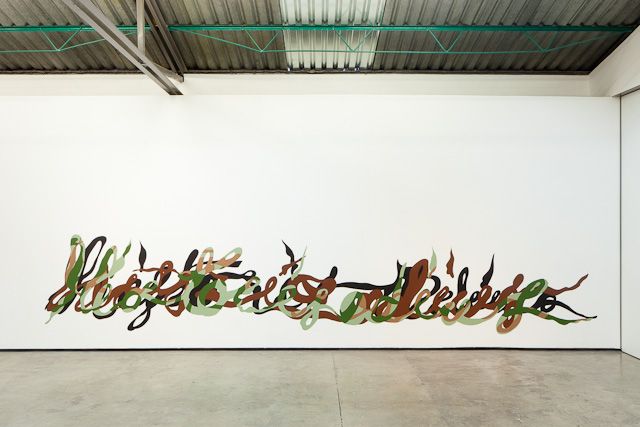 After moving to Peru in 2008, Vargas Lugo comes back with a show that appears like a synthesis of many of his interests: the main clue being that for the first time, he is self-referencing his pieces. Like always in Vargas Lugo’s work, language and narrative erase themselves to make space for the formal aspects of the work to activate all sorts of associations and ambiguities. Textile is the main medium used for this exhibition, allowing the idea of flexibility and binary interpretations of one same thing while playing on the idea of craft and time that is recurrent in his work.

Disguised under the appearances of what almost looks like an attraction park, the show deals with archetypal depositaries for idealizations and aspirations using diverse tools such as flags, Mayan artifacts and butterflies. The playful aspect of the works is shaded by distorted and ambiguous contents, saturating it visually.

One is welcome to the exhibition by Ombligo, an imposing wall that bars the visitor physically from the rest of the space. In its lower part, there is a big hole cut in the thickness of the wall, inviting people to look into the un-interpreted space within the wall while letting them see on the other side. The possibility to see anything else than this imposing fence is given only if one bends or crouch oneself, distancing the visitor by putting us in the uncomfortable position of voyeurism. Look at the show, you peeping tom, before becoming part of it. Like a magic trick, black cloth infiltrates itself in the hole, allowing us to see embroidered abstract shapes. What looks like a pipe system actually comes from a painting on an ancient Mayan vase representing the God of Maize, linked by an umbilical cord to two other characters. Vargas Lugo’s work is usually devoid of human figures, so it is no surprise that here he has removed the characters. This very strong imagery in which the god is the center, giving birth and taking life to his people at the same time, has been replaced by an abstract mapping of the relationships between the protagonists of the painting.

Historis Odius, is also the title of 2 pieces, a sculpture and what the artist calls ‘calligraphic tryouts’. The sculpture is made of fabric and steel. Its structure is inspired by the impossibly crammed flags in the seal of the OAS (Organization of American States). From the poles though, no hanged flags, but instead a two-sided fabric inspired by the pattern of the butterfly that gives its name to the piece. Like the butterfly itself, one side is bright and attractive while the other one is camouflaged. In lepidopterology, the bright side of a butterfly serves as a signal to find mates or startle predators, whereas the camouflaged side is a way for it to blend into its surrounding while at rest.

Not without irony, Vargas Lugo chose a butterfly with a name that contrasts violently with the delicate and fragile appearance of the insect.

Baptized Historis Odius by Jakob Fabricius in the 18th century, this butterfly –with a range that reaches from Texas to Southern Brazil- was a victim of the Danish naturalist’s flair for the characters of classical mythology and history. It is useless to ask ourselves now if he realized that this name would also convey a fundamental distress about the development of human affairs, and seems in itself to protest the very act of being named and classified.

The calligraphy on the wall refers both to graffiti and to the Mayan way of layering writing: the piece creates a generic, camouflage-like image in which almost everything can be read and seen. When one focuses on what is actually written, the words Historis Odius finally emerge. This time, the relationship between naming and object is reversed. The words lose their meaning making space for an image vaguely resembling nature.

Borrowing from Suprematism and from Japanese graphic design from the 60’s, New Flag is a series of collages inspired by butterfly patterns and 3-dimensional emblematic symbols used on flags (such as crosses and stars). Vargas Lugo literally explodes these symbols and creates a void that gives space to many interpretations that are not always coherent or harmonious.

Lores (Vexations) is a row of 5 screens on the floor. While 3 monitors show a continuous flow of red, blue and yellow patterns, two others display close-ups of wings that resemble extraterrestrial landscapes, or blurry and mysterious images from our insides. The rhythm that establishes the change from one image into another follows the structure of Vexations, a piece by Erik Satie where the theme is repeated 840 times, a music of stillness that calls for a different kind of listening. Inspired by the researches of Roger Caillois on animal mimicry, the piece explores how a butterfly that is blind to itself is able to create a pattern that fits its surroundings perfectly. Nature, so to speak, creating a high-resolution image of itself.

Finally, Transferencia Solar, takes the flags of Bangladesh and Japan and places them face to face, transforming them into a mirror image of each other. Then the artist actually sets the cut-out sun on the floor, in the indeterminate space between the two, underscoring the fact that while one country’s sun is always rising, the other’s is forever setting. 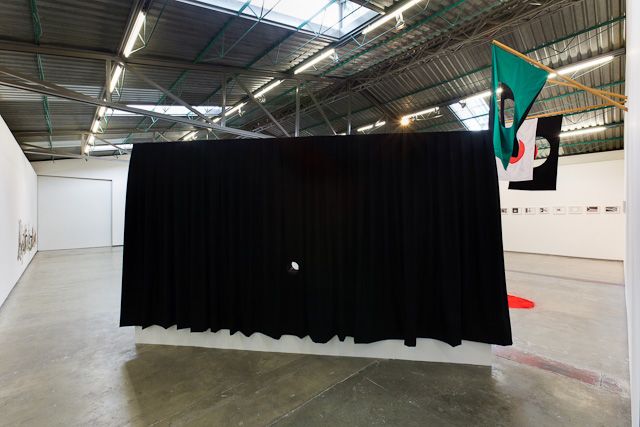 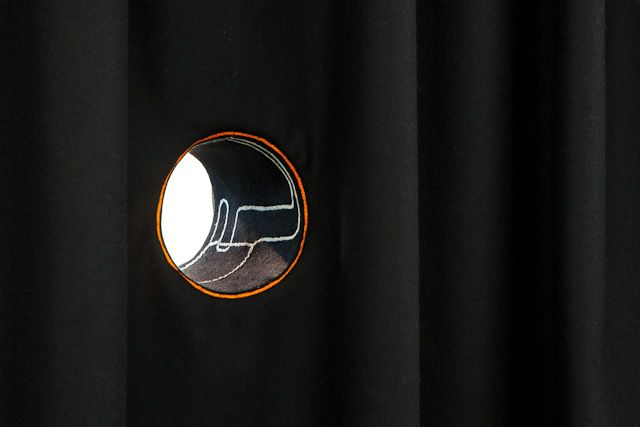 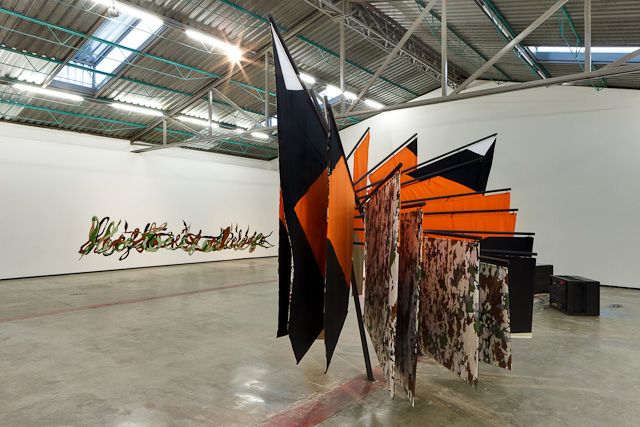 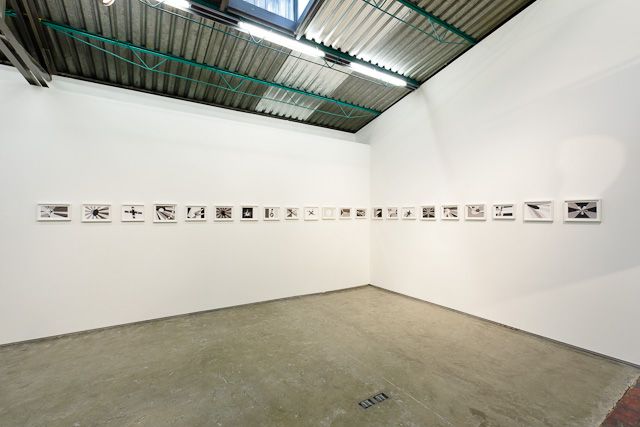 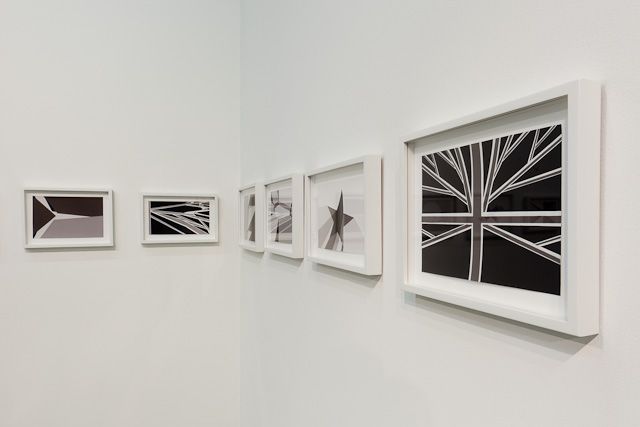 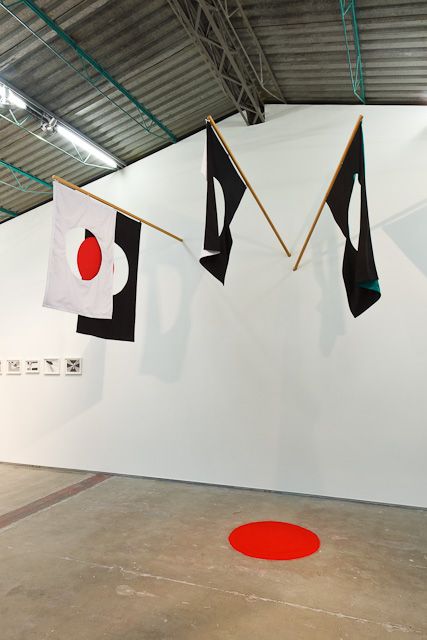 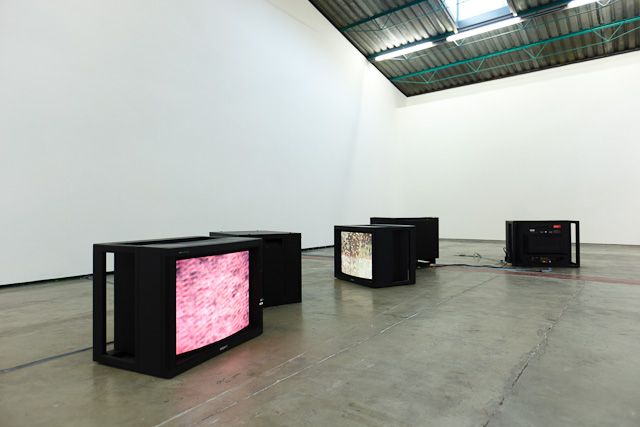 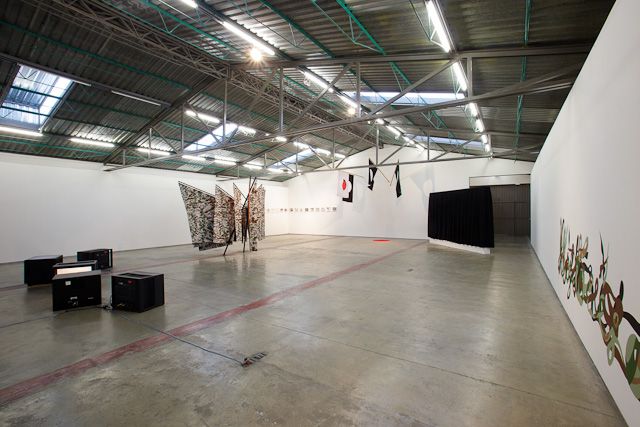