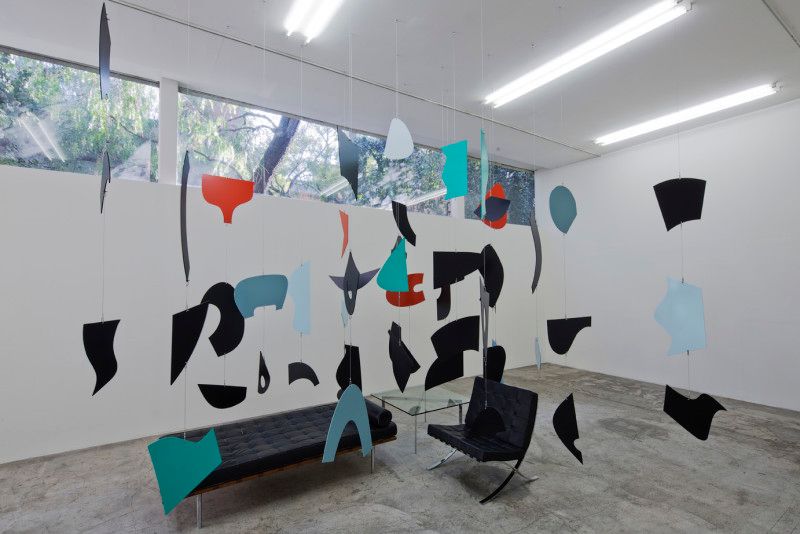 Terence Gower’s new exhibition with the gallery brings together a monumental outdoor sculpture, a painted frieze, seven new wall-sculptures, a series of gouache studies, and a room-size mobile, a recent commission from the IAC Villeurbanne in Lyon, France. The show is structured around a text the artist commissioned from Iranian psychoanalyst Gohar Homayounpour that describes a link between the intuitive artistic process and the Freudian analytical technique of free association. Gower has produced a new group of works extrapolated from the central work in the exhibition, the mobile Free Association, as well as from works in his 2012 exhibition at the gallery, Ottagono. These new works set up uncanny formal repetitions, triggering a sense of déjà vu as the viewer moves through the rooms of the gallery.

The central work in the exhibition, the mobile Free Association, is made up of 53 lacquered aluminum cutouts, suspended in a dense cloud over a group of furniture. The sofa, chair and table evoke either a waiting room or a psychoanalytic consulting room, but are rendered unusable by the mobile that hangs directly above them. The installation also references an earlier mobile of Gower’s, Noguchi Galaxy, shown in nearly the same spot in his 2012 exhibition. But in this new work it’s as if the earlier mobile has been atomized, and its shards and fragments, swirling in the air, have come to represent an earlier phase in the creative process. The piece operates as a 3D model of the intuitive process, picturing the maelstrom of dislocated forms, ideas, and memories, that eventually coalesce into a finished artwork. Free Association is made up of 4 groups of 5 strings of aluminum cutouts, each available in an edition of 2. In addition, the full installation—including furniture—is available as a unique work. 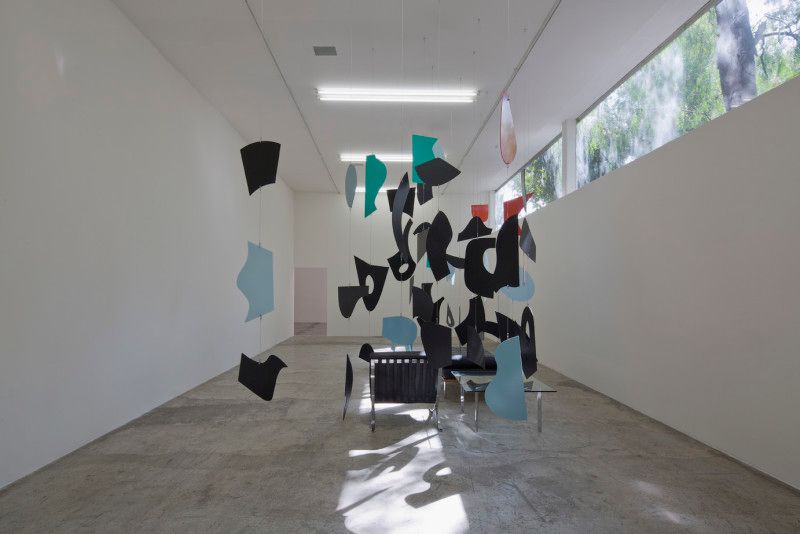 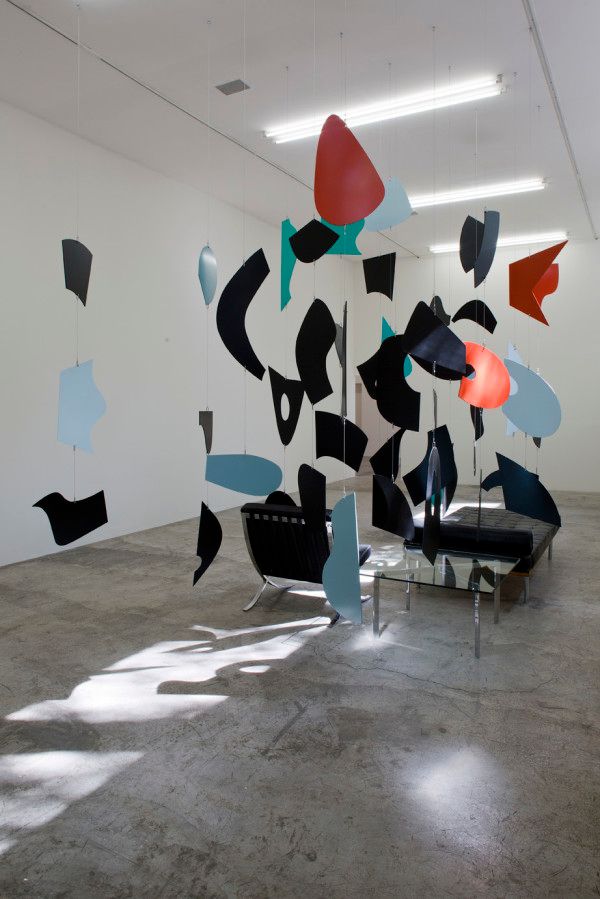 Gohar Homayounpour’s essay, Free / Not Free Association, was written in response to Gower’s Free Association mobile, and the artist’s new works in the exhibition’s third room respond in turn to the psychoanalyst’s text. Each work in this group is a study in stopping the movement of the mobile (using still photography) to generate new forms. In an exercise akin to Marcel Duchamp’s Standard Stoppages, where a series of sinuous forms were derived from strings dropped (stopped) and then traced, the Not Free Association series is made by freezing the mobile’s forms in movement, then using the resulting shapes in a series of paintings, wall drawings, and wall sculptures. At first glance, Gower’s slim, elegant (each 150 cm tall) wall sculptures appear to be carved from solid wood, but at closer inspection, they are composed of layered wood veneers, each a virtuoso work by one of Mexico City’s best lauteros (stringed instrument makers). They are designed to be taken off the wall and handled like guitars. A mural painting Not Free Association (Integración) is installed high on the walls running around room 3, like a frieze, and is likewise extrapolated from the forms of the mobile, frozen at different points in their revolution, with the resulting forms copied in an overlapping sequence around the room. A series of framed gouache studies for all works in the exhibition are shown in an adjacent room.

And finally, the monumental outdoor sculpture Sin titulo (Pareja), humorously titled to evoke the 1960s, features the return of two forms from the Noguchi Galaxy mobile—the black N and the red guitar pick—now made stabile in thick lacquered aluminum, bolted together and seeming to melt into the pavement of the gallery terrace. At the root of the artist’s sculpture work is an interest in the role of pleasure in contemporary art, and the viewer could be forgiven for reading the clumsy coupling of Pareja as a comical allegory for the pleasure principle.

Terence Gower has been engaged in two large bodies of work over the past ten years: a research-based series of installations on post-war architecture (an important example of this body of work is Baghdad Case Study, shown at the gallery in 2014); and a large body of sculptural work investigating associated meaning in abstract art from the same period, which encompasses the work in this current exhibition. 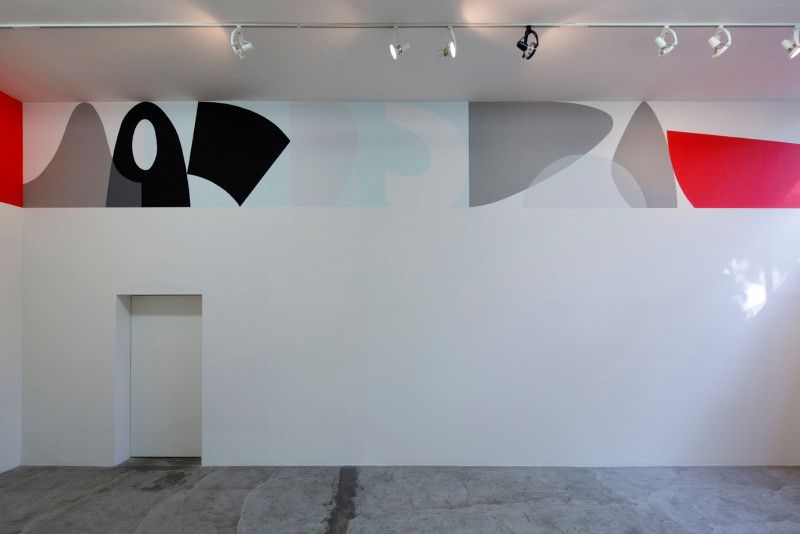 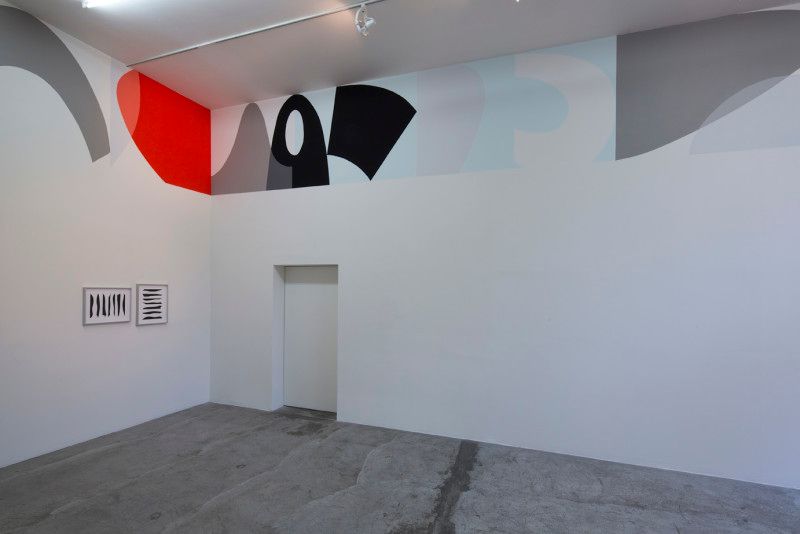 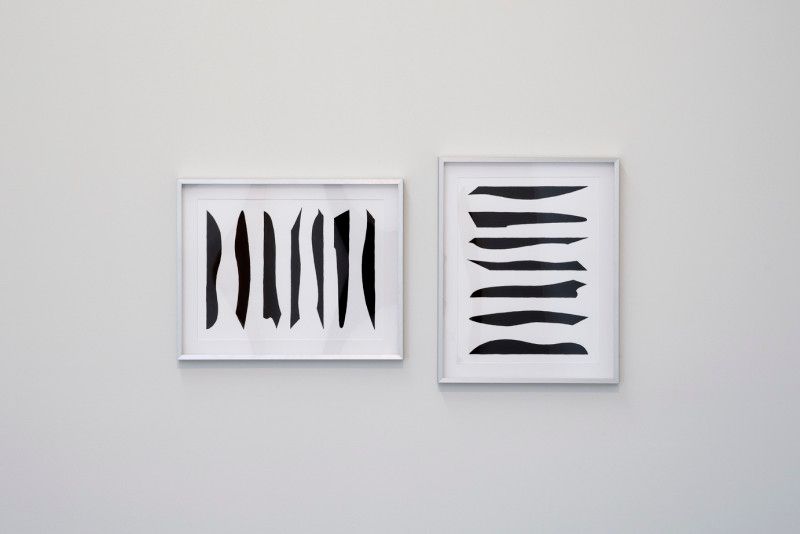 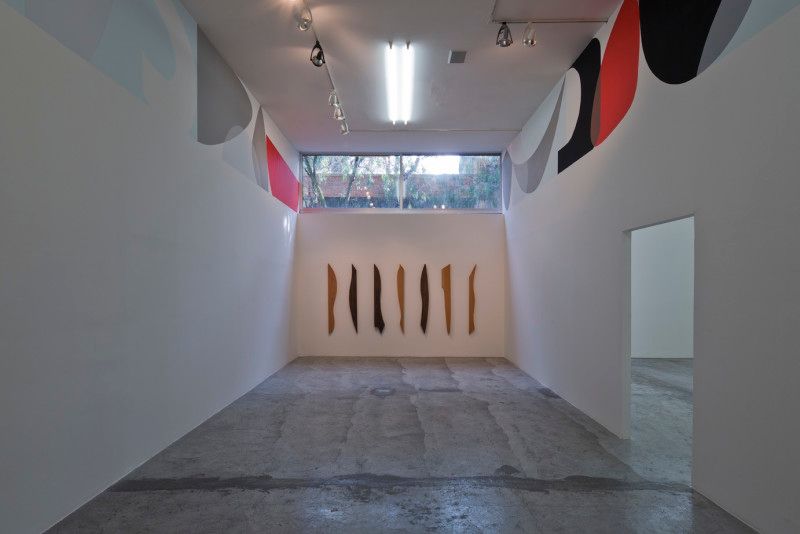 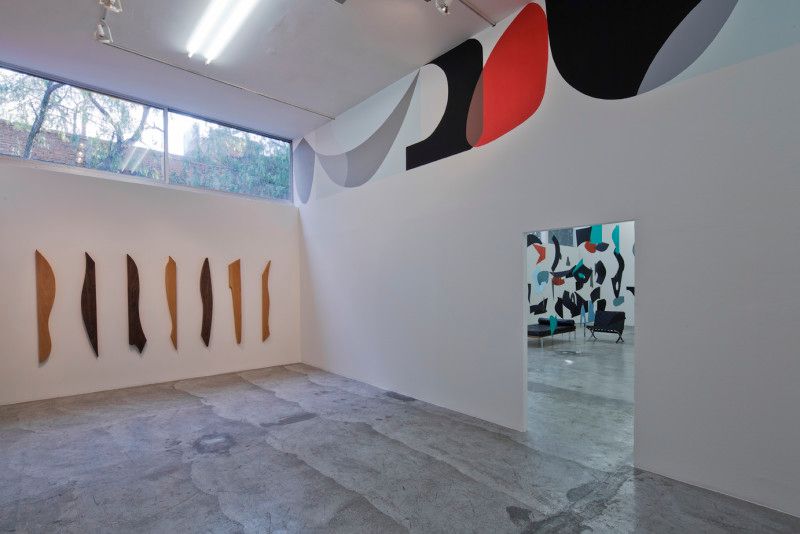 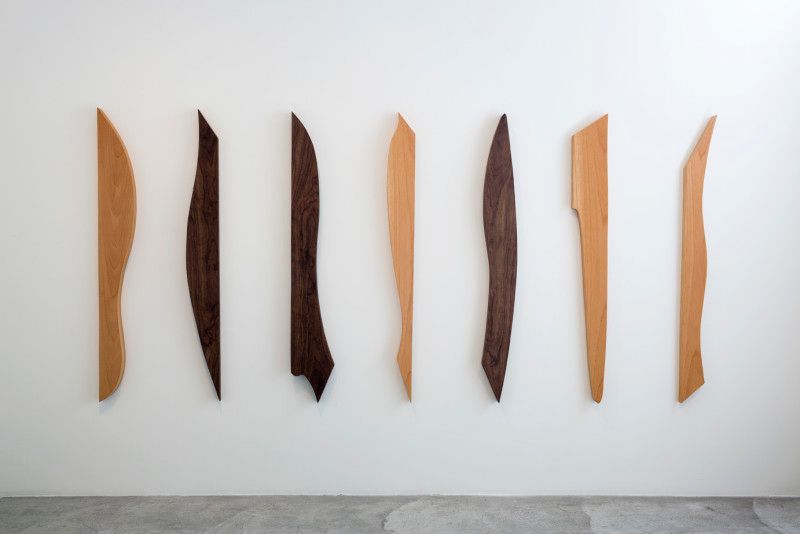 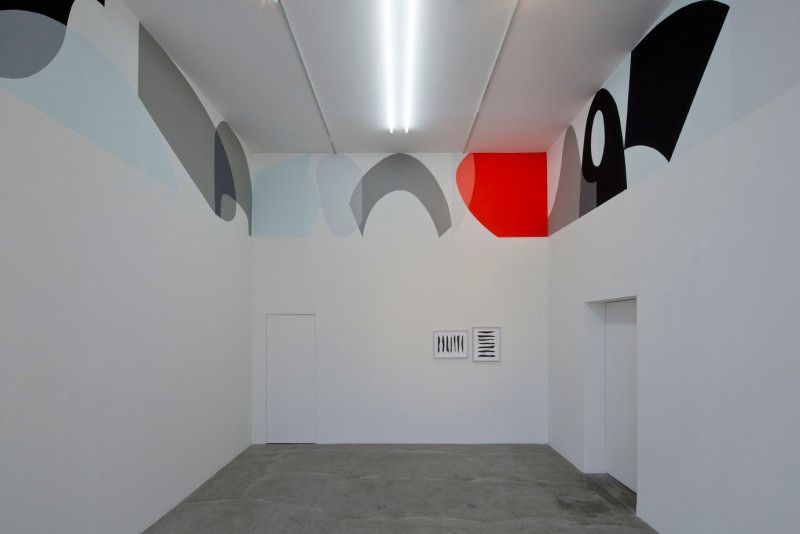 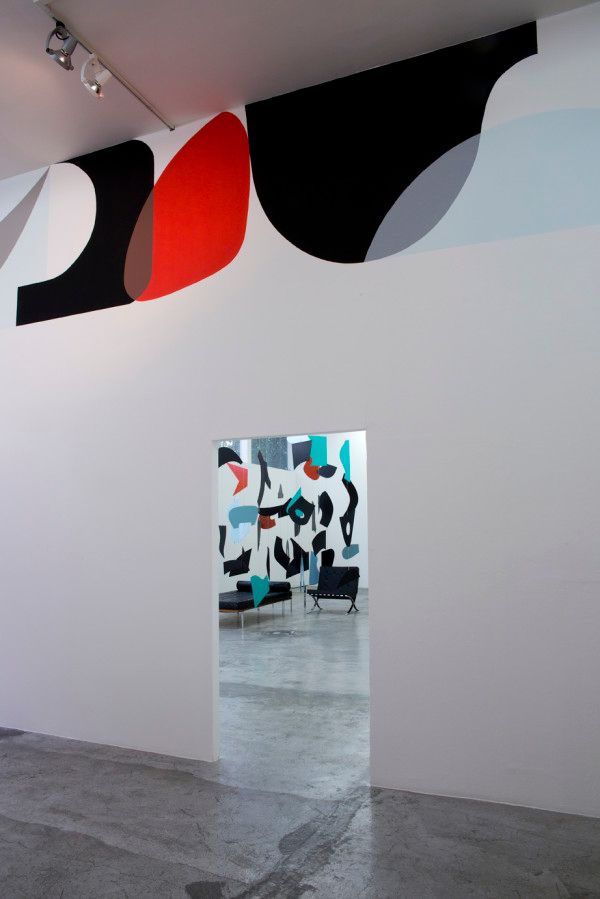 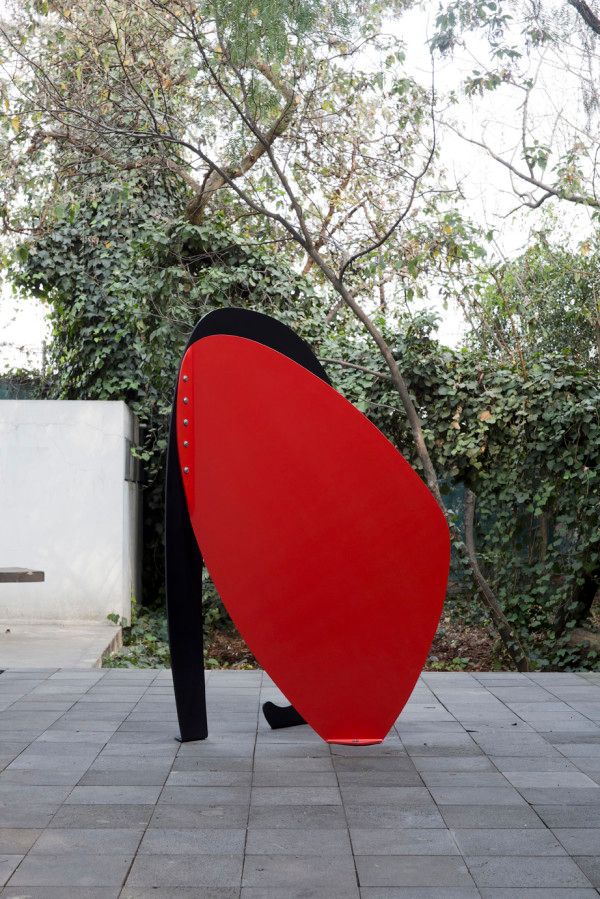 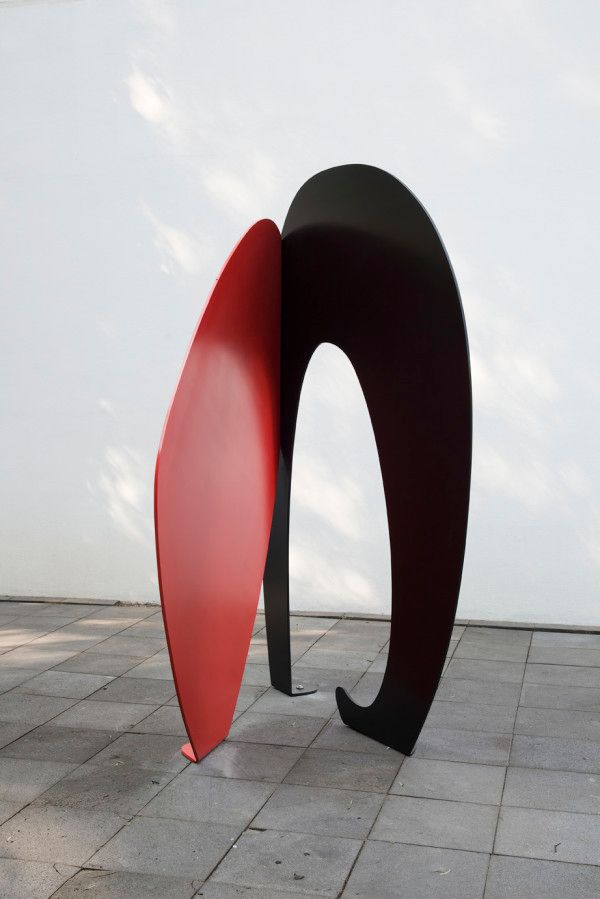 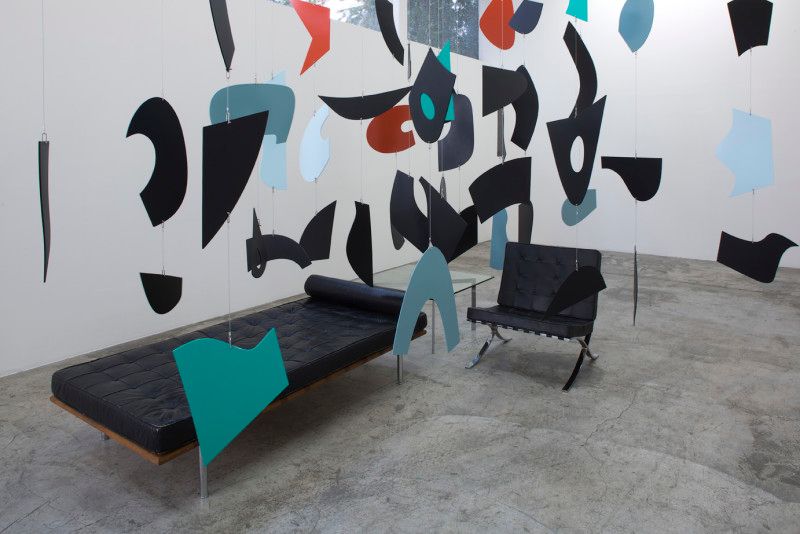